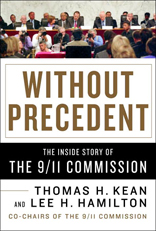 In an interview with the CBC, Lee Hamilton said he thought they were “reasonably successful in telling the story,” although he also acknowledged, “I don’t believe for a minute that we got everything right.”  However, that the Commission was set up to fail at all is a big Red Flag.  Why was the Commission set up to fail, and who did it?

Kean and Hamilton, in the first chapter of the book titled, “Set Up to Fail,” explain their reason for thinking this.

1) The late establishment and start of the commission itself.   In fact, it took 441 days after the attacks and a Congressional mandate to force the Bush administration into a formal investigation.
2) There were numerous complications in obtaining security clearances for Commissioners and staff.
3) There was a deadline for completion which did not allow the proper time to fulfill their mandate.
4) The commission was severely underfunded.  Only $3 million dollars was initially allocated, though two months later the Bush Administration reluctantly increased the total to $12 million.
5) The commission had restricted access to important documents and witnesses.  According to Hamilton, “… we were fighting the question of access right up to the end of the Commission’s work.”
6) False testimony was given by NORAD officials, and
7) The commission encountered obstruction by the CIA, and possibly the White House, over access to prisoners accused of having a role in the 9/11 plot.

One might reasonably ask; if they’ve got nothing to hide, why are they acting as if they do?  When Hamilton was asked by the CBC interviewer about why he thought they were set up to fail, he laughed, and said, “I think basically it’s because they were afraid we were going to hang somebody, that we would point the finger, right in the middle of a presidential campaign.”

The 9-11 Commission was mandated by law to “provide a full and complete accounting” of the tragic events of September 11th.  How on earth were they able to carry out this mandate if they were “set up to fail”?  The answer is, they couldn’t.