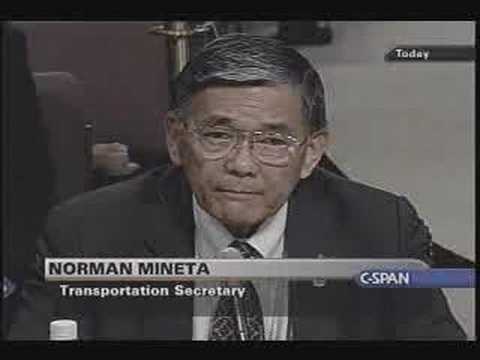 On the morning of September 11th, 2001, Vice President Dick Cheney was in charge of the military response to the attacks while the President flew around the country in Air Force One.  The 9-11 Commission failed to follow up on the nature of and order the Vice President had given which related to American Airlines Flight 77 which hit the Pentagon at 9:36.  Many have wondered if these orders were NOT to shoot down Flight 77 as it approached the Pentagon.

We know about this order because on May 23, 2003, then Transportation Secretary Norman Mineta testified before the 9-11 Commission.  Secretary Mineta testified that he was present at the Presidential Emergency Operating Center (PEOC) in a bunker below the White House on the morning of September 11th under the direction of Vice President Dick Cheney.  During questioning by Co-Chairman Lee Hamilton, Mineta was asked if he was in the PEOC when the Presidential order was given to shoot down suspected hijacked commercial airliners.

During the time that Secretary Mineta testified about, Flight 77 had already been severely off course for over an hour and it was thought that the flight was being controlled by terrorists.  Flight 77 was also being tracked by the FAA and NORAD and according to Secretary Mineta’s testimony it was even being tracked for at least 50 miles from the PEOC.

Secretary Mineta’s testimony has raised many questions.  The most obvious question is, what were the orders that Vice-President Cheney had issued to the young man?  When asked by Mr. Hamilton during testimony if the order was a shoot down order, Secretary Mineta could not confirm that it was.   Is it reasonable to assume that this was a shoot down order?

During this same hearing, Secretary Mineta also testified that aircraft had been scrambled from nearby Langley Air Force Base and were only 10 miles away from the Washington D.C. area.  If the orders Secretary Mineta spoke of was a shoot down order, then why was this plane not shot down before it hit the Pentagon?  Our modern fighters are the most sophisticated in the world and can shoot down multiple targets from many miles away.  The question begs to be asked,  were these orders the young man spoke of orders NOT to shoot down Flight 77?

We now know that Naval Officer Douglas F. Cochrane is the young man Mineta was referring to in his testimony.  When questioned about the day, Mr. Cochrane has refused to answer questions about what happened and repeatedly refers to the 9-11 Commission as the definitive report on the terrorist attacks.

It is another failure of the 9-11 Commission that this testimony by Secretary Mineta was not followed up on.  Today, important questions still persist about what these orders were and why the 9-11 Commission failed to dig deeper and ask questions of how Flight 77 could have possibly been allowed to strike the heart of the US Military.